The costs of caring

Kirsten McEwan of the University of Derby reflects on what she learned from evaluating Schwartz Rounds in a mental health setting.

Healthcare workers are a rare breed. For many people, caring behaviours are typically targeted at family and friends rather than strangers. But in healthcare, caring for people we don’t know is often a key motivation for entering the profession. However, this caring can come at a personal cost in terms of stress, secondary trauma and burnout.

Schwartz Rounds offer a supportive forum for healthcare workers to share the more difficult emotional aspects of their work. Whilst the Rounds are well established in physical health settings, they feature less in mental health settings.

Yet mental health settings are ripe for Schwartz Rounds. Mental health workers often face highly emotional situations: supporting people who are suicidal, hearing about traumatic events, and being subject to threats and sometimes violence. They can find themselves working with people who’ve had highly traumatic experiences and family histories. This often means that patients’ capacity for relating to others is so damaged that the care given by professionals can feel alien to them and be met with fear, withdrawal or anger. In addition, low control over caseload, high job demands and feeling unsupported are key components of the high stress often experienced by mental health workers – and healthcare workers in general.

One clinician at Derbyshire Mental Health Services, seeing her colleagues struggling with stress, began asking around about how to increase compassion at work. This led to the introduction of Schwartz Rounds for staff at the organisation. With support from the Kings Fund, a six-month trial began, accompanied by a research evaluation to gauge how helpful the intervention was for mental health workers.

The stories shared during the session were, as one attendee put it, ‘emotional!’ In one story, a manager described the extreme stress of trying to keep everyone safe as a patient became more and more agitated and threatening. As he attempted to slip by the patient to let the support team in, he was attacked by the patient and believed he was going to be killed. In another, a nurse described the feelings of loneliness, dread and anger as she did her daily walk down a long corridor to the room of a young patient who had attempted suicide on multiple occasions, where she feared one day she could find her patient dead. A clinician working in the community shared her fear the day that she turned up to a patient’s house to find the door kicked in and her trepidation entering as she expected to find her patient murdered by her abusive partner. Her description of the frantic, day-long search for her missing patient had the group feeling that panic with her.

As one of the researchers supporting this work, and as someone with an interest in entering clinical training myself, sitting in and listening to such intimate and emotive stories certainly made me question whether I was resilient enough to go into clinical work (I’m still a researcher). I found the openness of speakers incredible. It set the tone for the Rounds as a safe place to share stories of these very difficult emotional situations – to let the veil of professionalism drop away and reveal the human within.

In our research we asked Rounds participants to briefly describe the Rounds. They commonly used terms such as insightful, honest, cathartic, and bringing humanity to the profession. The survey of 150 Round attendees revealed 43.3% rated the Rounds as ‘Excellent’, and 30% as ‘Exceptional’.

We also ran focus group interviews with participants, which revealed some of the difficulties mental health workers often experienced. These include the pressure to hide emotions from patients and colleagues because of a fear that these would be deemed unprofessional or a sign of weakness. Another was the struggle with feelings of anger at work, particularly towards patients, which often resulted in staff feeling guilty. Workers often referred to ‘the costs of caring’ which included self-criticism, self-blame, guilt, taking anger and worry home, loneliness, isolation, and stress (which could also be seen as a sign of failure by colleagues).

Participants said that the Rounds helped with some of these issues. For example, the experience of sharing both positive and negative emotions in an accepting, validating and non-judgemental environment was a relief. It was also ‘de-shaming’ to realise that colleagues had felt similar emotions and thoughts in similar situations. The group felt extremely grateful for the opportunity to express and share emotions and experiences, and felt valued, validated and supported by colleagues. Revisiting the Rounds six years later, we found that they were still well attended and highly rated as a valuable experience.

We’re hopeful that word will spread and more mental health services will start their own Schwartz Rounds. The Rounds are a discussion of emotion, but they are also a rare opportunity to show vulnerability. It certainly seems to have helped the mental health workers in Derbyshire to cope with difficult emotions and improve their relationships with fellow workers – who perhaps now seem to them a bit more human. 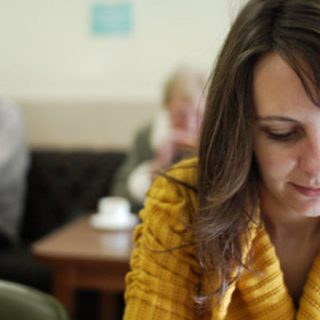 College of Health, Psychology and Social Care, University of Derby