The role of the Schwartz Round mentor is to support facilitators, clinical leads and steering groups in the development and consolidation of skills required to run safe, high quality Schwartz Rounds.  They also help to build confidence in understanding how to position Rounds effectively within organisational contexts.

For most organisations mentors do this by observing Rounds in action and debriefing afterwards, sharing what worked well and what could be approached differently. They also provide off-site support via email and telephone.

Mentors should help the Schwartz team to think about:

Our mentors have significant experience with Schwartz Rounds and work with us to support organisations running Rounds. More information about them can be found below. 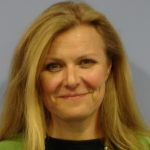 Alison is a mentor and also helps to develop and deliver the training for Schwartz Rounds. She previously led on the implementation of Rounds in a large multi-site acute trust, where the value to staff became immediately apparent. Alison’s clinical background is in Speech & Language Therapy, and more recently she has worked in organisational development, with staff & patient experience as the focus.

Alison feels passionate about the potential for Schwartz Rounds to have a positive impact on the culture of health organisations. Alison tends to mentor organisations in the North of England. 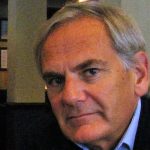 Andrew worked for 20 years in hospice management and in 2015 made a move to work as a clinical nurse at St Catherine’s Hospice in Crawley.  He first heard about Schwartz Rounds in 2012 and believed that they would be a perfect forum for hospice staff to discuss their work in an open, safe and crucially a multi-disciplinary way.

Andrew has seen discussions within Rounds that have enabled many staff at different levels to open up and be passionate about the way that their work has affected them and what it means to work in palliative care. Andrew tends to mentor organisations in South East England. 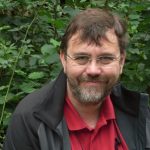 Andrew is a consultant anaesthetist with a long term interest in training and education. He works in Middlesbrough (one of the early Schwartz sites) where he has been the clinical lead, participating from the audience regularly.

Andrew believes that Schwartz Rounds which carefully adhere to the original model are really good for staff and patients, and he aims to help organisation to achieve this. Andrew tends to mentor organisations in the North of England. 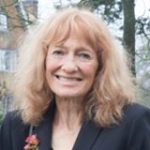 Anne Cullen is a registered social worker with over 40 years’ experience of working in Health and Social Care as a practitioner and senior manager in public and voluntary sector organisations. She has a master’s degree in leadership and a PhD in social work leadership. Anne facilitated Schwartz Rounds for 6 years, is an experienced mentor and has published articles about techniques of facilitation and the impact of Rounds within an organisation.

Anne has seen how Rounds provide a unique for staff to connect with each other’s experience at a very human level and how this can improve organisations’ ability to provide compassionate care. Anne mentors organisations in London, the South East and Midlands region. 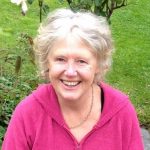 Annie works as a Clinical Psychologist at the Royal Devon and Exeter NHS Foundation Trust where they run Schwartz Rounds in partnership with a neighbouring mental health trust.  Annie is also Clinical Director for the Doctorate in Clinical Psychology at Plymouth University, where she teaches community psychology.

Annie enjoys the inter-professional camaraderie that comes with Schwartz Rounds and recognises the importance of witnessing the power of shared storytelling and deep listening. Annie tends to mentor organisations in South West England. 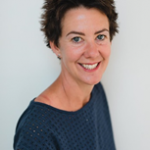 Becky Platt is a children’s nurse with over 20 years’ NHS experience and work as an Advanced Clinical Practitioner in Paediatric A&E at the Royal London Hospital.  As a frontline member of staff, she understands the importance of caring for colleagues as well as for patients and is passionate about the benefits of Schwartz Rounds.

Becky facilitated Rounds for several years at Watford General, where they had a very successful Schwartz programme and has been a mentor since 2018. 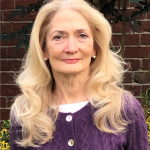 Cindi Bedor is a psychotherapist working primarily as a trauma therapist and, until she took early retirement in late 2018, managed the Staff Counselling and Support Service at the Royal United Hospitals Bath NHS Foundation Trust, working both strategically and clinically at all levels of the organization. Her experience with Schwartz Rounds includes writing the business case and gaining funding to establish the Rounds, chairing Steering Group and facilitating Rounds from 2014-2018, and using data to feed back into the organization. Cindi tends to mentor sites in the South West. 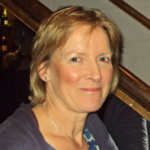 Claire is a registered physiotherapist and works as an operations manager at the National Spinal Injuries Centre, Stoke Mandeville Hospital. Claire has been facilitating Schwartz Rounds for over 5 years. She believes that Rounds are an ideal forum to reflect on challenging and thought provoking situations in the everyday working environment.

Claire finds mentoring other organisations extremely rewarding and humbling, hearing other people’s challenges and seeing people benefit from this type of forum. Claire tends to mentor organisations in North West London and the midlands. 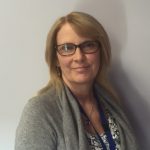 Claire is a Consultant Psychologist and Psychotherapist, and the lead for psychological therapies at Pennine Care NHS Foundation Trust. Claire became involved with Schwartz Rounds after attending a Health Education North West event on compassionate care. This led her to set up the Rounds at Pennine Care over 2 years ago which she finds very rewarding.

Claire is part of a Psychological Professions Network which has developed its own Schwartz Community of Practice in the North West. Claire tends to mentor organisations across the Greater Manchester and Merseyside footprint. 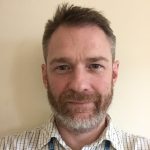 Graham works as a Research Nurse within Derbyshire Health Care NHS Foundation Trust. Graham discovered Schwartz Rounds in his previous role as a ward manager within adult inpatient mental health services. This led him to help set up the Rounds over 5 years ago, which he is strongly committed to.

Graham tends to mentor organisations based in the midlands and surrounding areas.

Jenny Watmore-Eve is a palliative care social worker and has been facilitating Schwartz rounds since 2011 both in hospices and in large hospital trusts. She has been a mentor for some years and also co facilitates some of the training for Schwartz facilitators 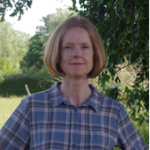 Kim is a registered nurse who has worked front line in a busy hospital for over 30 years.  She now works as Staff Wellbeing Lead for an acute and community trust in East Sussex. Kim has been a Schwartz round facilitator at East Sussex Healthcare NHS Trust for 3 years and has been one of the prime movers in establishing regular and frequent rounds across the two major hospitals and Community. She believes passionately in the effectiveness of the Schwartz Rounds in supporting staff at all levels by enabling them to share experiences and talk openly about the emotional challenges of working in the caring profession. 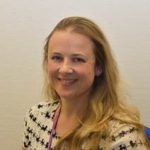 Liz is a Clinical Psychologist at Stoke Mandeville Hospital. She discovered Schwartz Rounds when they were introduced to her trust and has been part of the steering group from the initial set up. Liz believes that the Rounds have made a real difference to the work culture in her organisation.

Liz tends to mentor organisations in Buckinghamshire and the nearby counties. 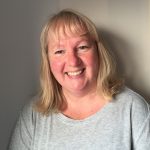 Louise became a registered nurse in 1988 and currently works within an education and practice development role in a Welsh Health Board. Louise secured a Florence Nightingale Travel Scholarship which allowed her to visit Boston in 2015 to look at where the Rounds originated over twenty years ago.

Louise has helped to spread Rounds across her organisation which has 16,000 staff working in primary, community and secondary care. Louise tends to mentor organisations in Wales. 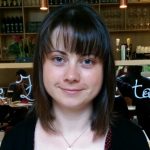 Nicki is an art therapist and has worked in both acute and community NHS settings. She currently leads on staff support at South London & Maudsley NHS Foundation Trust and facilitates the Schwartz Rounds there. Nicki also helps to facilitate Rounds at University College London for medical students.

Previously, Nicki has also run Rounds in a community based NHS Trust in the North of England. Nicki tends to mentor organisations in greater London and also mentors two pilot sites for Schwartz Rounds in Ireland. 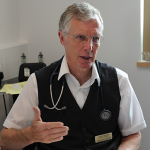 Peter is a Consultant Cardiologist and Divisional Director of Medicine and Emergency Services at Ashford & St Peter’s Hospitals NHS Foundation Trust.  He has felt throughout his career that staff working in the NHS have not had sufficient opportunities to unburden themselves of difficult emotional situations in caring for patients and their families.

Peter believes that Schwartz Rounds give them those opportunities to tell and share their stories. Peter has been Clinical Lead for Schwartz Rounds since 2013. He tends to mentor organisations based in the South London area.

Raymond is Clinical Psychologist working in acute healthcare, and now employed in the university sector as a tutor on the Doctorate in Clinical Psychology.  He has been involved with Schwartz Rounds since the UK pilot scheme in 2009, and has been facilitating Rounds regularly since January 2012. Raymond tends to mentor organisations in the North of England. 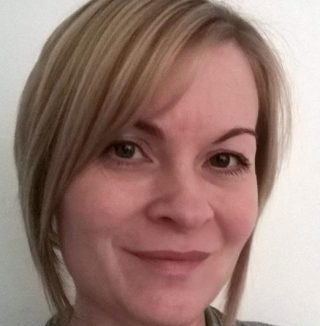 Rachel Domone is a Consultant Clinical Neuropsychologist and Professional Lead for Older Adult Psychology at Lancashire Care NHS Foundation Trust. Rachel is a clinical lead for Schwartz Rounds, which have been running successfully at the Trust for approximately 3 years. She has a particular interest in understanding ways to best support staff well-being in challenging roles within the diverse mental health and community Trust in which she works.

Rachel tends to mentor organisations in the North West of England. 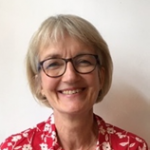 Rachel is a Consultant Clinical Psychologist and experienced supervisor with a postgraduate qualification in Coaching and Mentoring. She worked in acute NHS health care for 39 years, ultimately leading psychology service within the medical division. She was responsible for introducing and establishing Schwartz rounds within the North Bristol NHS Trust where she was the clinical lead.

Rachel remains committed to providing support to health care professionals in her current practice and is an enthusiastic supporter of Schwartz Rounds as she has seen at first hand the impact that they can have in supporting staff to make the “unbearable bearable”. 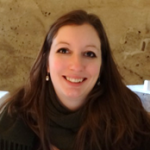 Rachel has found the Schwartz Rounds one of the most exciting and rewarding initiatives that she has been involved in. Rachel tends to mentor organisations in London. 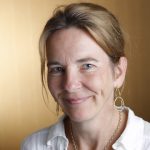 Rhiannon previously worked at POCF shortly after it started up in 2013 and was involved in the set up and roll out of Rounds across the country.

She has had the privilege in being involved with training and seeing how facilitators and clinical leads have grown in their role and how Rounds have begun to change the culture and feel of many of the organisations where they are run.  She is particularly interested in how the Rounds embed in different settings and contexts; acute, community, mental health, primary care and education. 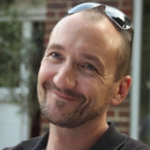 Russ works as a Macmillan Counsellor at Chelsea and Westminster Hospital. He discovered Schwartz Rounds whilst reading about enabling compassionate care. This led him to help set up the Rounds, which he has found very rewarding.

Russ started facilitating Schwartz Rounds in September 2013 and then became a mentor at the end of 2014. He tends to mentor sites that are based in London and Kent.